It’s 2020, yet no one has overthrown Google from its dominance. The world-leading search engine and tech company continue its internet monopoly by influencing every aspect of what we do online.

Who would’ve thought a simple search website back in 1998 would later become the most significant and most influential website today? It was improbable, but Google proved everyone wrong.

To show you just how dominant Google is, let’s look at some numbers. Every year, State Counter creates a graph showing the market share of search engines worldwide.

Google has become a part of our everyday lives. So with that said, why do some people think that the Google search engine is getting worse?

Is Google Getting Worse?

Google is a powerhouse of data and information. It takes up a considerable chunk of the internet’s space by serving billions of internet searches a day.

Google also has billions of webpages that it has crawled, which makes up its ever-expanding search index. However, it also gets plenty of things wrong for all the good it brings to our lives.

If you’re wondering what these are, we’ve listed them down for you to see. That way, you can better understand Google search problems and how Google deals with them.

Whether you’re always using Google or barely using it, you most likely know that it keeps changing now and then. The search engine giant makes hundreds of changes to its platform via updates throughout the year. And when we say updates, we mean a lot of it.

Google made 3,200 updates in 2018 alone, with the numbers increasing each year. Unfortunately, this crazy number of updates had side effects. It confused users, infuriated SEO professionals, and changed the entire internet landscape.

The average user can show a multitude of examples of why they were not happy about these changes. However, we should also look at the bright side once in a while. After all, these updates were geared to make the entire search engine experience better. (What is Google Panda?)

Also, Google’s constant algorithm changes are the reason why thousands of people are employed. SEO marketers, in particular, appreciate these changes since it keeps them in demand. So in a way, Google also helps with the overall economy and employment rate.

Google is a big chunk of technology that provides information and convenience. Since it’s a technological entity, it also suffers from glitches, bugs, and several broken parts.

In April 2019, for instance, Google had to repair a technical error that causes pages to be deindexed.

In that same month, Google had a mobile issue that selects unrelated URLs reflected in the breadcrumb trails. In the following month, Google announced that the search engine is experiencing indexing issues again.

So as you can see, Google regularly goes through issues. That’s also the reason why it gets constant updates, as said in the previous section. Google fixes several errors to make sure the users will consistently have a good search experience.

Search engines are not perfect, and Google is no exception. It’s impressive with the number of results it can provide. But it’s not always on point with what you’re trying to search. Google can read through your search term and deliver what they think is the most accurate answer.

Other searches that are more granular are guided with specific details. For instance, searching for a person’s name can return with a featured snippet. All of these answers are works in progress as Google gathers more information through its bots.

However, there are certain times when the results that came back are incorrect. For instance, there was a time when you searched for “Ice Cube net worth,” and it will show a list of other related searches.

There’s a photo on that list of American rapper Vanilla Ice as representing a different rapper named Ice-T.

This error was fixed, by the way, but it shows that there are inaccuracies with Google. The same goes with other search engines, for that matter. Fortunately, Google fixes them even before they go viral.

Google Does What Google Wants

Google is aggressive when it comes to testing out new concepts and features. Unfortunately, they are not always ideal, nor do they stick. These constant updates and changes can be quite confusing.

Brands are always keeping up with what Google changes to maintain their SEO rankings. Unfortunately, changing a marketing approach due to an abrupt change can be frustrating to SEO marketers.

Another issue is that these changes aren’t even permanent. There are so many instances where Google announces a sudden change, only to revert to the original after a few days.

It’s a bit irresponsible on Google’s end, but it is what it is. The search engine needs to keep updating to serve a much bigger purpose and provide what the people need.

Finally, we have privacy. Google kept it a secret a decade ago, but not anymore. Information regarding Google acquiring and using your data for profit and gain is out in the open.

It sounds shady when you think about it. But it’s not all leverage for Google. Tracking web searches also help other areas.

For instance, search history has resulted in hundreds of criminals behind bars. It has also generated billions in advertising profits — $135 billion, to be exact, in 2020 alone. It took a bit of a dip compared to the $135 billion from last year. But that’s still a lot of money.

Google isn’t getting worse. In fact, it’s the other way around. It’s improving and making our search experience better every year. (Read The Business Owners Guide to Local SEO)

The search engine is growing for a reason. Its concept works, and everyone is happy about it. If you think that Google is getting worse, you need to look at it from a different, more optimistic perspective. 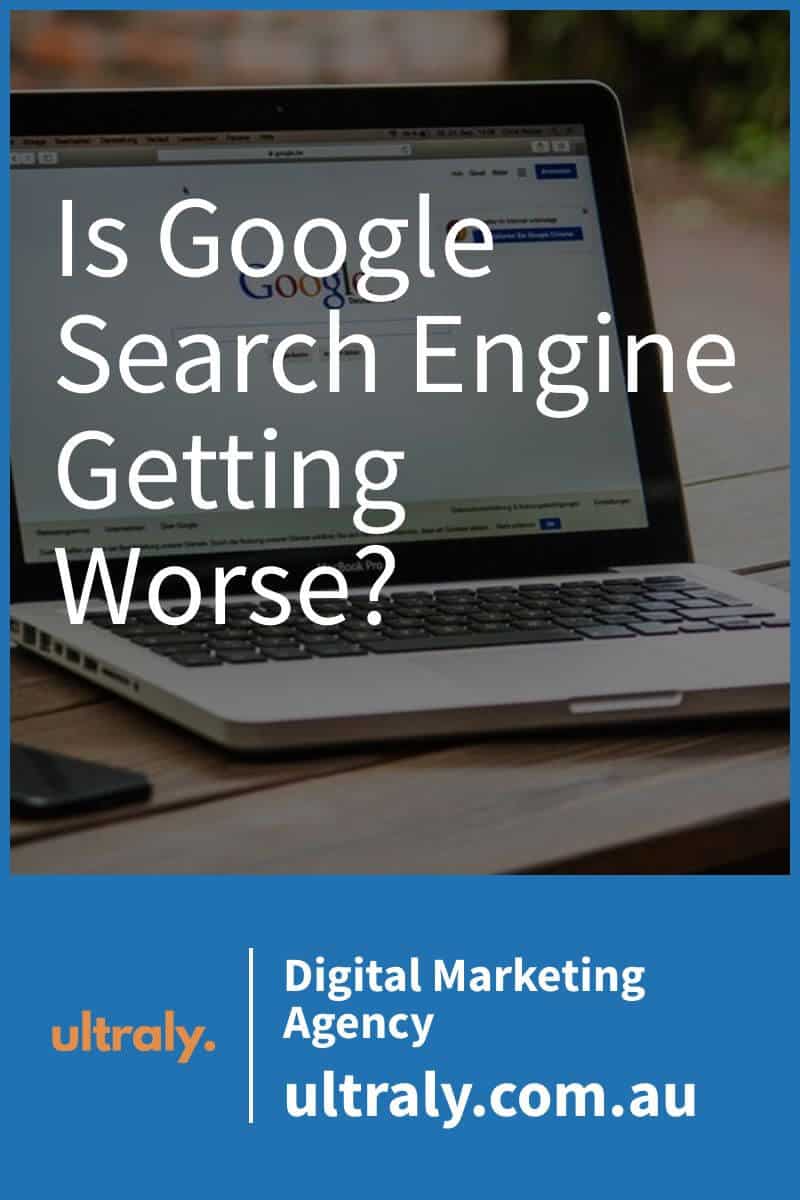